About The Worm Works 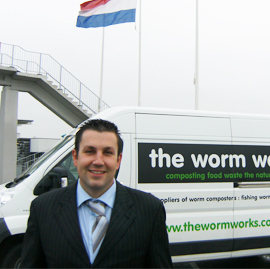 Using worms to compost food waste is a very successful and popular method used throughout the world. It works because it is simple. You take some worms, put them in a box and add your food scraps. The worms eat the scraps and digest the food. The end product is the very best potting compost available anywhere.
It is possible to carry out this process in any old plastic box but Finnis Organic Worms have developed a system, The Worm Works which means that there is no mess, no smell, no chance of the worms escaping, and which also produces a liquid fertiliser known to gardeners as black gold!

The Worm Works operates simply.There are three trays. You place some worms in the bottom tray along with some food scraps which the worms eat. Once they have finished that food they move by themselves up to the next tray into which you have put food and the first tray is now ready to use as compost. You simply keep the system going and the liquid fertilizer gathers in a chamber at the bottom where there is a tap to drain it into your watering can.

The Worm Works is constructed from high quality recycled plastic, with a limited 5 year warranty on materials and workmanship. It is very simple to assemble and can be stored inside or out.

The Worm Works requires only a little effort – perhaps 15 minutes a week. It will even look after itself while you go on holiday.

Is there a smell?
As long as you are operating the bin as instructed there will be no smell.

Where do I get the worms from?
The worms you require are included in the price of The Worm Works, they will be sent to you directly by overnight delivery.

Where do I keep The Worms Works?
It is best to keep The Worm Works in a sheltered part of the garden or on a balcony. In very cold weather it can be placed in a garage or shed. Many people keep them in the kitchen.

Can the worms escape?
The Worm Works is designed to allow air to flow through it while preventing the worms from escaping.

How much compost is produced?
It really depends on the quantity of food scraps you place in The Worm Works. For a large family you can have additional composting trays which will produce more compost.

You will receive a 16 page illustrated
booklet with The Worm Works which tells you
everything you need to know.

Using worms to compost food waste is a very successful and popular method used throughout the world. It works because it is simple. The end product is the very best potting compost available anywhere.
Click to download brochure